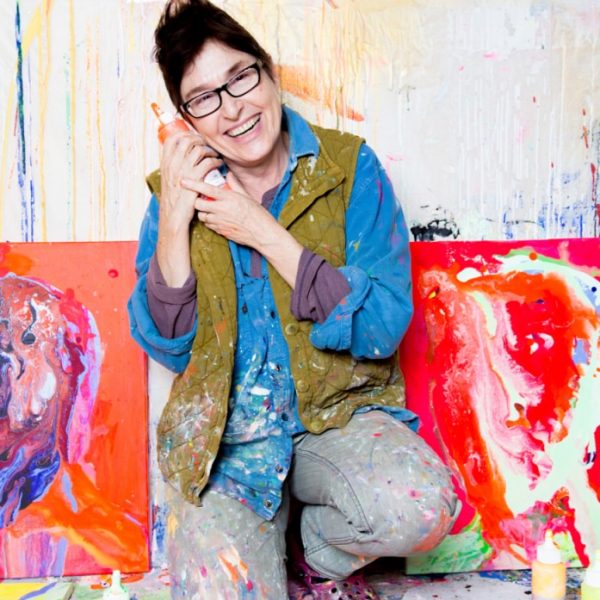 Born in Chicago in 1953, my parents students at the University of Chicago, I early decided to become a painter. I studied painting at the School of the Art Institute of Chicago then changed my focus and studied Physics. My love of Physics has continued to this day where I see the effects of Fluid Dynamics in my painting.

In 1972  I went to Vienna, Austria, where I attended the Art Academy. In Vienna I came into contact with Viennese Actionism and  the Material Actions where paint is used as material. I  discovered the energy of the paint and the concept of direct self-expression through the material paint.

At this same time I also studied figure drawing practicing the expressive lines I saw in the drawings of Gustav Klimt and Egon Schiele. I became aware of the importance of the figure in painting, the impact of a compelling figurative situation.

The problem in painting as I perceived it was to reconcile the wild energy of abstract painting with the representation of the figure.  I knew I had found my calling – to allow the paint total freedom while still representing a figurative situation.

My life became a quest for the perfect painting where the abstract energy of the paint would be at its height and the representation of the figure at its most defined.

I completed my “Silhouttes” series in 1990, figures approximated by throwing dark paint at the white surface.

I lived in Munich for several years where I completed my first “Lovers” series and then moved to Portugal in 1996. There I could apply my color experiments to glowing landscapes of olive and almond trees.

In 2008 I decided to return to my home country and I moved to New York. I lived in Brooklyn where I met some amazing street artists. Using stencils and fluorescent colors were among the techniques I learned working with them. During this period I used the name “Sprezanne”.

In 2009 I founded Radical Art Initiative, a collaboration between street artists and street theater to create visuals for social and environmental actions in New York City. We worked with 350.org and other environmental initiatives with actions such as drawing the 2100 high water line on the sidewalk of Lower Manhattan with blue paint.

In 2010 I finished my “Mutables” series, a group of paintings that change in black light.

Being in numerous group shows in Brooklyn and the Lower East Side gave me the chance to exchange ideas with other painters and to  reinforce my certainty that the new direction in painting requires the unification of abstraction and figuration.

In 2017 I published an art book, “The Waterdrinkers”, funded through Kickstarter.

A book release was held on 4/29/17 at Quimby’s Bookstore, Brooklyn.

In 2018 I moved to a remote area of Northern California. The challenge of living in the wilderness has deeply affected my painting. My respect for nature is expressed in intense landscapes in watercolor and acrylic.